Hospice Orillia Client Reflects on His Caregiver Journey with Wife 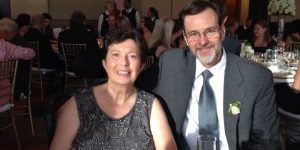 Michael Williams says he couldn’t have gotten through without the support of Hospice Orillia.

Michael describes his late wife, Sheila MacFeeters, as a very social woman who had a huge heart and simply loved people. Sheila had a strong passion for volunteerism and she was always looking for ways to give back to her community.

Unfortunately, in 2009, Sheila was told that she had incurable and inoperable brain cancer with the prognosis of only 3-5 years to live. After pursuing years of treatments and a clinical trial, in June of 2014 they were told there was nothing more that could be done. It was then that Michael and Sheila decided to move to their home in Orillia where they had planned to retire, to enjoy the rest of Sheila’s life, making the most of what time she had left.

As Sheila’s primary caregiver, Michael was extremely concerned about the quality of care that she received. At first, when Michael was referred to Hospice Orillia, he explained that he was hesitant and was not actually aware that Community Hospice services were available in Orillia. However, after engaging Hospice Orillia and having the opportunity to use the full spectrum of their services from Visiting Volunteers to Bereavement Support, Michael explains he “couldn’t have gotten through without the support of Hospice Orillia.”

The trained volunteers, who likely had lived similar experiences with loss and grief, provided support by visiting with Sheila and allowing Michael some much needed respite.  They also provided companionship and encouragement as Michael adjusted from anticipating having an empty chair beside him, and then embracing the reality of his loss and that empty chair, following Sheila’s death in 2017.

Michael describes his caregiver journey as an adventure and some of the best years of his life, having been given some of the best gifts of closeness, love and time together – all special memories with Sheila. “I would trade the outcome, but I would never trade the time that I had with her,” says Michael.

Written by:
Mandi May, Communications & Fundraising Coordinator of Hospice Orillia 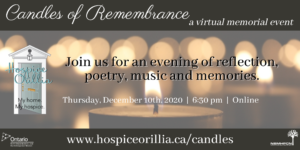 Bereavement is the state of having suffered the loss of a loved one. It is the time after a loss during which grief is experienced and mourning occurs.

Mourning is the external expression of grief. It includes rituals that mark someone’s death, such as funerals, wakes or memorial services. Mourning is strongly influenced by a person’s spiritual and cultural beliefs and practices.

Hospice Orillia offers practical, emotional and spiritual support to those in our community coping with advanced illness, death and bereavement. Our volunteers and staff serve clients and their loved ones of all ages and backgrounds with compassion and respect, while honouring their choices and supporting them through their life journey.

Hospice Orillia will be recognized as a leader in both providing and advocating for Hospice Palliative Care services within our community. We will enhance the awareness and understanding of the need for these services through education, collaboration and community involvement.

Hospice Orillia is committed to creating and maintaining an environment free of discrimination.  All individuals are treated with respect and dignity, and have equal opportunities. Our programs, services and opportunities will be accessible regardless of age, ancestry, colour, race, citizenship, ethnic origin, place of origin, creed, disability, family status, marital status, gender identity, gender expression, receipt of public assistance, record of offences, sex, or sexual orientation. We always provide a positive space to our clients, volunteers, and staff, no matter what.